Hooch was rescued by Red Lake Rosie’s Rescue, then transferred to RAGOM (Retrieve A Golden Of Minnesota)for foster care. Friend of Flicka has faithfully supported both of these rescues and we’re glad to see a happy ending for Hooch. 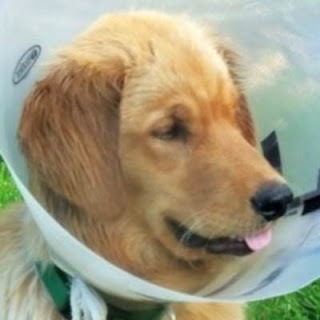 Hooch is a 9 month old, beautiful purebred Golden Retriever. This dog is absolutely delightful. Hooch came to RAGOM from a home where he lived outside unfenced and allowed to wander. One day the people came home and Hooch was injured with noticeable evidence in the yard of a scuffle. The owners believe he was attacked, perhaps bear, maybe coyote, wolf, raccoon, or another dog. The owners could not afford vet care and he was surrendered to Red Lake Rosie’s Rescue who in turn called RAGOM. We are so happy we have him and thank Red Lake Rosie’s for rescuing him. 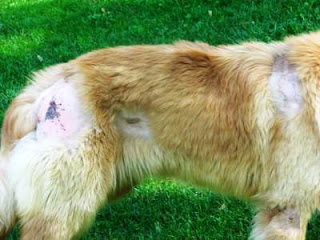 Hooch was immediately transported to a vet office to look at his wounds. Luckily, none are deep and did not require stitches. He doesn’t want to leave them alone however, so is sporting an e-collar and will do so until the areas have healed and are past the stage of possible infection. I’m sorry, but it’s difficult to take pictures of a dog with a cone on his head, so the pictures of him are as good as I can do at the moment. He doesn’t particularly like the e-collar (and I don’t blame him, he bumps into everything and everybody with it on), so it has already taken some serious wear and tear and as you can see, is duct taped to hold it together. Hooch also has ear infections which we are treating and he scratches a lot. He was covered in ticks which have been removed and he was given a flea/tick preventative. I’ve been waiting for the wounds to heal before giving him a bath. I’m hoping that once he gets a bath, he’ll feel better and not itch. He also has numerous scabs on his skin from the ticks. At the moment, I don’t know if he is scratching because of his skin condition or if he has environmental or food allergies. I give him a Benadryl twice a day along with his antibiotics and am feeding him a grain-free food. He is neutered, up-to-date on shots, heartworm negative and clean fecal (no parasites). 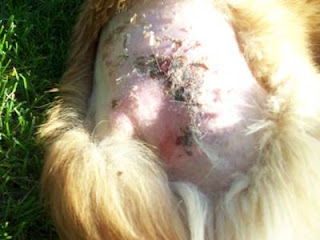 He met the other six dogs (three large, three small) at his foster home with his tail tucked between his legs. Once the meet and greet (one at a time) was completed, and he got the nod of approval from the resident dogs, Hooch lifted his tail and has been great with all the dogs. He fits right in. No aggression towards humans or dogs. I can do anything to him. He also of his own accord, appears to be housetrained and for a recently neutered male, I’m happy to report that I haven’t seen him mark anything either. I crated him for a few hours when he arrived to give him some time to rest and relax. He wasn’t crazy about going in the crate, but was quiet while in there for a couple of hours. Since then, I have not had a need to crate him. He sleeps on the floor in the bedroom at night, doesn’t get up on the furniture, doesn’t chew on things, likes to carry around shoes, but hasn’t damaged anything. Has been left home with free roam with the other five dogs for up to six hours with no problems. He has started to play with a couple of the dogs when outside, enjoying running around the backyard with them.

The perfect home for Hooch will be one that wants to help him develop into becoming all that he can be – which is a great dog. He doesn’t know any commands, so priority will be someone that enjoys taking their dog to positive motivational obedience training. His personality is so gentle and calm that developing into a therapy dog to visit children in hospitals or adults in nursing homes would be a very high possibility for him. He is very much the velcro Golden. I don’t have cats due to my own allergies, but I can’t imagine that they would be an issue with Hooch. His previous home had children so he was socialized to kids at a young age.

Will write more after his bath and let everyone know if that helps the itching and subsequent scratching. His wounds are healing nicely. He may have some permanent hair loss on his backend. I don’t know if the hair will grow back there or not. He is a beautiful boy either way.
——————————————————————————– 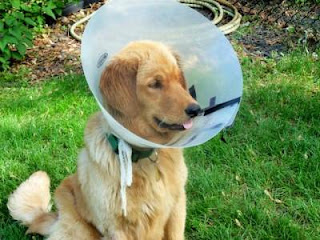 UPDATES:
06/22/2011:
I am very happy to report that Hooch has found his forever home. We get to enjoy him for a few more days and he will officially be adopted on Sunday. Hooch will have a loving mom and dad and a teenage brother and sister to love him, train him, pet him, play with him and make his life wonderful. The family is also considering training him in the future to be a therapy dog where he will be able to make many people happy with his so gentle, friendly personality.

I gave Hooch a bath with medicated shampoo and leave in conditioner hoping to help him be more comfortable. While it may have helped a little, it wasn’t enough and he kept scratching, so he visited the vet and is taking a short course of steroids to help him stop itching. We are hoping that once he stops itching and subsequent scratching, that he will heal and not itch in the future. His ear infection is healing up well.
——————————————————————————–

07/04/2011:
Hooch is officially adopted. He moved to his new home and met the cats in his typical calm, happy manner. He will have a mom and dad and two teenagers to love him. Way to go Hooch (n/k/a Hunter). We look forward to lots of happy updates and stories as Hooch enjoys his new life.